Overview
Have you noticed the arch in your foot collapse over a fairly short period of time as an adult? Or Do you suffer from pain on the inside and sole of your arch? If it does, then you may be suffering from a condition known as adult acquired flat foot. As one of the main support structures of the foot?s arch, the tibilais posterior tendon, along with other muscles, tendons and ligaments, play a very important role in its mechanical function. 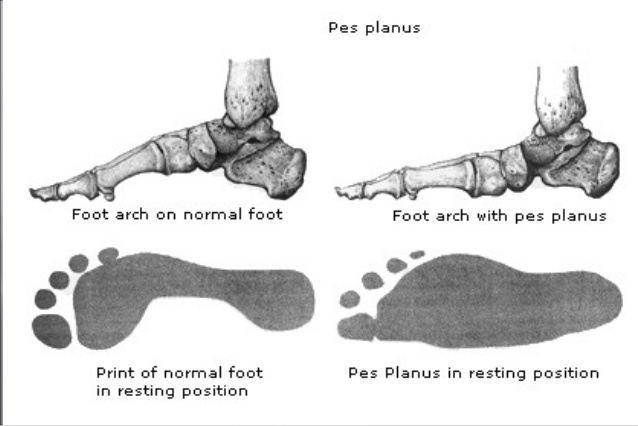 Causes
Adult acquired flatfoot is caused by inflammation and progressive weakening of the major tendon that it is responsible for supporting the arch of the foot. This condition will commonly be accompanied by swelling and pain on the inner portion of the foot and ankle. Adult acquired flatfoot is more common in women and overweight individuals. It can also be seen after an injury to the foot and ankle. If left untreated the problem may result in a vicious cycle, as the foot becomes flatter the tendon supporting the arch structure becomes weaker and more and more stretched out. As the tendon becomes weaker, the foot structure becomes progressively flatter. Early detection and treatment is key, as this condition can lead to chronic swelling and pain.

Symptoms
Initially, flatfoot deformity may not present with any symptoms. However, overtime as the tendon continues to function in an abnormal position, people with fallen arches will begin to have throbbing or sharp pain along the inside of the arch. Once the tendon and soft tissue around it elongates, there is no strengthening exercises or mechanism to shorten the tendon back to a normal position. Flatfoot can also occur in one or both feet. If the arch starts to slowly collapse in one foot and not the other, posterior tibial dysfunction (PTTD) is the most likely cause. People with flatfoot may only have pain with certain activities such as running or exercise in the early phase of PTTD. Pain may start from the arch and continue towards the inside part of the foot and ankle where the tendon courses from the leg. Redness, swelling and increased warmth may also occur. Later signs of PTTD include pain on the outside of the foot from the arch collapsing and impinging other joints. Arthritic symptoms such as painful, swollen joints in the foot and ankle may occur later as well due to the increased stress on the joints from working in an abnormal position for a long period of time.

Diagnosis
The history and physical examination are probably the most important tools the physician uses to diagnose this problem. The wear pattern on your shoes can offer some helpful clues. Muscle testing helps identify any areas of weakness or muscle impairment. This should be done in both the weight bearing and nonweight bearing positions. A very effective test is the single heel raise. You will be asked to stand on one foot and rise up on your toes. You should be able to lift your heel off the ground easily while keeping the calcaneus (heel bone) in the middle with slight inversion (turned inward). X-rays are often used to study the position, shape, and alignment of the bones in the feet and ankles. Magnetic resonance (MR) imaging is the imaging modality of choice for evaluating the posterior tibial tendon and spring ligament complex.

Non surgical Treatment
Icing and anti-inflammatory medications can reduce inflammation and physical therapy can strengthen the tibial tendon. Orthotic inserts that go inside your shoes are a common way to treat and prevent flatfoot pain. Orthotics control the position of the foot and alleviate areas of pressure. In some cases immobilization in a cast or walking boot is necessary to relieve symptoms, and in severe cases surgery may be required to repair tendon damage.

Surgical Treatment
In cases of PTTD that have progressed substantially or have failed to improve with non-surgical treatment, surgery may be required. For some advanced cases, surgery may be the only option. Symptomatic flexible flatfoot conditions are common entities in both the adolescent and adult populations. Ligamentous laxity and equinus play a significant role in most adolescent deformities. Posterior tibial tendon dysfunction (PTTD) is the most common cause of adult acquired flatfoot. One should consider surgical treatment for patients who have failed nonoperative therapy and have advancing symptoms and deformities that significantly interfere with the functional demands of daily life. Isolated Joint Fusion. This technique is used for well reducible flat foot by limiting motion at one or two joints that are usually arthritic. The Evans Anterior Calcaneal Osteotomy. This is indicated for late stage II adult acquired flatfoot and the flexible adolescent flatfoot. This procedure will address midtarsal instability, restore the medial longitudinal arch and reduce mild hind foot valgus. The Posterior Calcaneal Displacement Osteotomy (PCDO). This technique is indicated for late stage I and early stage II PTTD with reducible Calcaneal valgus. This is often combined with a tendon transfer. A PCDO is also indicated as an adjunctive procedure in the surgical reconstruction of the severe flexible adolescent flatfoot. Soft tissue procedure. On their own these are not very effective but in conjunction with an osseous procedure, soft tissue procedures can produce good outcome. Common ones are tendon and capsular repair, tendon lengthening and transfer procedures. Flat foot correction requires lengthy post operative period and a lot of patience. Your foot may need surgery but you might simply not have the time or endurance to go through the rehab phase of this type of surgery. We will discuss these and type of procedures necessary for your surgery in length before we go further with any type of intervention.

Login to quote this blog

You cannot quote because this article is private.